TIPS, TRICKS, AND TALES WITH OUR CREATIVE DIRECTOR 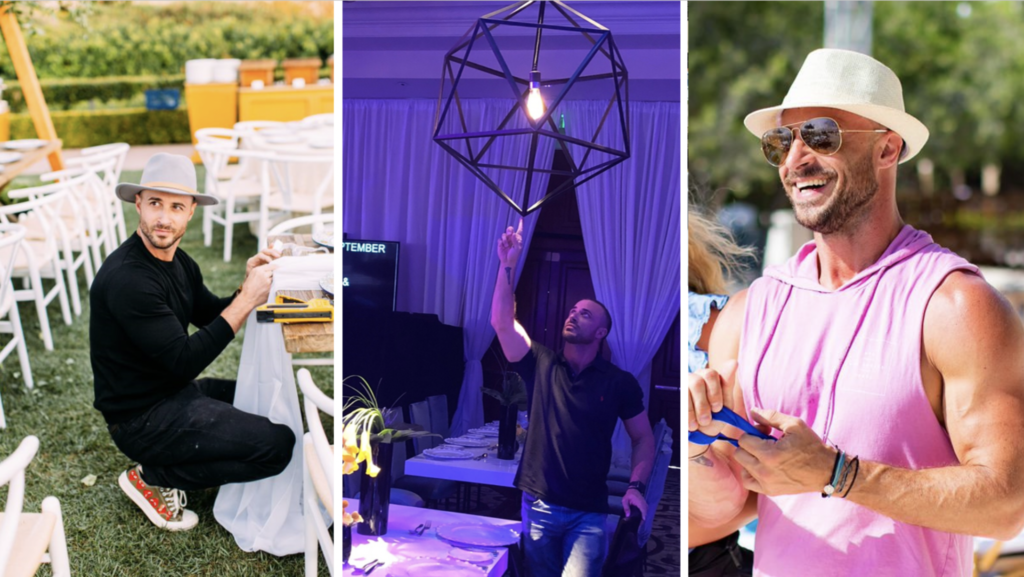 Tale: An Event Producer was Born

The first event I ever produced was a funeral when I was 12 years old.

Okay, so without any backstory that seems VERY intense… let me clarify:  It was the funeral for a cracked egg.  In the 6th grade, our middle school gave an assignment where every student received a hollowed-out egg that we were expected to care for.  At the end of two weeks, if the egg had no cracks, you received an A.  However, if it had any sort of crack or damage you received an F.  There was no in between.

I remember being so excited for this assignment.  I couldn’t wait to be an egg dad!  I already had a little bed crafted up in my locker for it…. I was going to give it a name…. I crafted miniature wigs made out of yarn…. I even bought a glue gun and sequins (I would figure out the purpose of this later on, but I’m sure I needed it for my egg baby) …. I was set!   After the teacher handed me the egg, I proudly walked back to my seat.  Thinking of the amazing life I was about to give my new egg child, I must have not noticed it slowly falling out of my hand.  Before I knew it, it was too late.  My egg was shattered on the floor and my fate as an egg dad was over.

As a straight ‘A’ student, failing was not an option.  I had to come up with a plan that would somehow override this pass/fail system our school had been following for years with the project.  I knew what I had to do!  I had to plan a funeral, but not just any funeral, an ‘A-worthy’ funeral!

Since the assignment itself was two weeks, I had two weeks to prepare (my first crap deadline).  I first made a program.  This program would serve as the timeline.  I scheduled some of my friends to say a few words and even the principal to read a poem.  The school choir sang amazing grace and “I’ll be missing you” by Sting.  Ridiculous?  Yes…. Over the top?  Definitely.  However, I GOT THE A.  In fact, I was the first student ever to receive an A with a cracked egg!  The grade was a great reward, but the true take away was the beginning of my love for events.  The event planning spirit had officially entered my soul.  Watching the laughter and excitement in everyone’s face for the event I planned did something to me (granted it was technically a funeral for a breakfast item).  It gave me a sense of purpose, pride, and power by being able to remove people from their reality through a party.  In that moment, an event planner was born!

In blogs to come I will elaborate and expand on the below points but wanted to give a few bits of career advice I’ve learned along the way.

Remember the golden rule: Treat others the way you want to be treated.   I cannot emphasize this enough; be nice to your team, be nice to your workers, and be nice to your vendors.  All these people have the power to make or break your event.  In events, we all need to come together as one cohesive unit to make magic for the client.  You are only as strong as your weakest link, therefore motivate each ‘link’ by being kind and showing encouragement.

2) Know your budget and space

There is nothing worse than designing something to later find out it can’t fit into a location, or you don’t have the money for it.  Brandis Protenic, our VP of Operations, and I did a guest blog that dives deeper into this topic and the importance of design and operations working side by side.

3) Don’t let the opinions of others stifle your creativity

When I first started my career, I worked for some prominent people in the event world.   They designed for celebrities, movie studios, etc.  Although they hired me, I was still so intimidated to design for fear of criticism.   However, you must remember- design is an art and art is subjective.  If someone doesn’t like your design, don’t let it break you.  Leave your pride at the door and know that just because someone does not like your design, doesn’t mean you’re a talentless toad (my internal saboteur).  If pairing a leopard linen with a sequin sash speaks to you, then by all means, do it… just have a few safer options for the client to see as well.  Unfortunately, leopard and sequin is not for everyone! 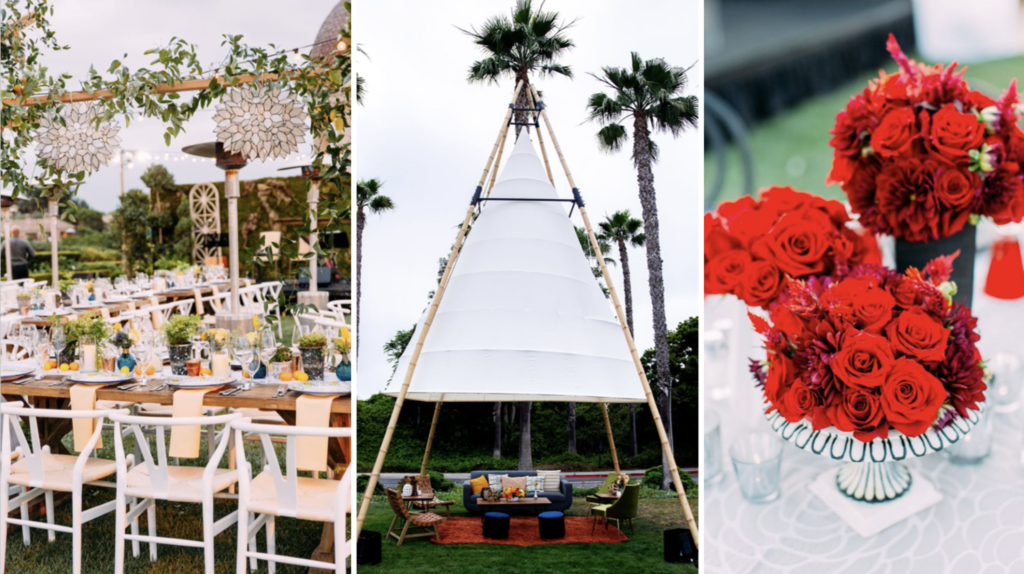 The Laguna Beach coastline served as a great backdrop for this corporate dinner. We went with a beach farmhouse vibe and love the bold color combo! ...

For Nests new product featuring jasmine and chamomile, we created a tea bar with these specific flavors... Guests got to experience the unreleased candle through several senses! ...

Guests enjoyed our 'Lincoln Sanctuary Lounge' where they could unwind with the calm app on silent headphones and hand massages. ...

Happy to be the decor partner for Well+Good as they announce the upcoming trends for 2022!
photo: @jredziniak ...

Allowing us to carpet over the 'not so great 🤢' ballroom carpeting really lightened up the room and created a canvas for us to paint.
photo: @siroonp ...

We used softness in chairs, pampas grass and blush accents to juxtapose the hardness of the cement tables.
photo: @siroonp ...

Cue 400 foot kings table…more photos to come but we couldn’t wait to show you a sneak peek of this moment we have created at @terranearesort this evening! ...

The calm before the storm... and then the storm (fitness guru/ goddess/ queen @msjeanettejenkins) ...

We show up for the gift bag, let's be real!
For this recess themed event we went vintage lunch box instead of traditional bag for our sponsors to stuff with goodies! ...

Our stage served as the perfect backdrop for an influencer fitness event hosted by @iamwellandgood ...

What recess would be complete without hopscotch? None i want to play at! Therefore we made a 26' custom hopscotch carpet for the entrance foyer. It brought out the inner child in everyone!
photo: @sarkisstudios ...

When in doubt, add a fully tatted cigar roller! He added just the right amount of excitement and fun for this networking event! ...

Giving our client nautical vibes for their Newport harbor event.

we can’t get enough of tropical vibes seen on the runway at NY fashion week #eightoneevents ...

NY Fashion week always inspires. This week we take a look at the runway and some of our own “fashion” inspired events. What were some of your favorite looks?! #eightoneevents ...

We don’t know about you, but we always seem to be thirsty on Thursday’s so let’s celebrate these amazing bars that help quench the thirst! First up..the Seaside Sip from this #welcomereception in #aruba at the @ritzcarltonaruba Who else wants to be transported there today? We sure do! ...

Well, we thought we'd jump on this Emma Robert's meme too.

A simple floral cart was an easy way to add a dramatic pop without breaking the budget.

It's all about the floral accent.

For this wedding we brought in crystal touches in the chandeliers, glassware and centerpieces to be the right amount of juxtaposition.
#wedding #weddingdecor #events #eventprofs #eventplanning #weddingplanning #rusticwedding ...

For real though... #freebritney

We are all about the knot tie for napkins right now... and then adding a slight little embellishment 🥳 📸 @johnwolfsohnphotography ...

So happy in person events are back! Here's a look at the influencer event for @wibargain with @rnepartners! 📸: @johnwolfsohnphotography ...

This grey velvet linen allowed the red floral and patterned china to be the stars of this show. #bestSupportingRole for this hollywood look. ...

Client: give us Hollywood, give us glam ✅ #eightoneevents ...

Making all the wishes on this dandelion #eonatureweek ...

Nature inspo is back early, well because time is an illusion. First up polymore mushroom cluster in New England woods #EOnatureWeek ...

We love seeing images of our custom gifting! We sent 1100 custom #converse Chucks globally to attendees for their Sales Kick Off. #eightoneevents ...

We ❤️ gift boxes! We curated this box for attendees in conjunction with a virtual history tour of Downtown Los Angeles. #eightoneevents ...

Following the trend with our dear Aunt Mary Fiore ✌️

When Monday’s are floral art. #floralsforspringgroundbreaking ...

Daisy Rainbows... not a bad drag name. Any other good ones with event lingo?
#floralforspringgroundbreaking ...

There is beauty everywhere... just adjust your vision. #floralforspringgroundbreaking ...

Terrified of lizards, birds and bugs... but less terrified if they are made of flowers. #floralforspringgroundbreaking ...

It's finally spring!!! This floral art installation at an abandoned house gives us all the feels!!! Here's to the rebirth of live events! #floralforspringgroundbreaking ...

Find your zen 🧘🏽 with virtual yoga from our fav instructor Destiny. #EOVirtual ...

Tasked with bringing joy to their clients we partnered with @accor for a virtual improv show, full of laughs and prizes! #EOvirtual ...

For a women’s retreat we offered a virtual smokey eye tutorial with a Laura Mercier brand ambassador for attendees to rock with their mask glam. Attendees also received signature eye shadow pallets from Laura Mercier in mail to practice along. ...

This weeks feature a look at some of our favorite virtual events! stay tuned! #eightoneevents ...

Friday feels! ( Also there was room on the door for Jack) #eightoneevents ...